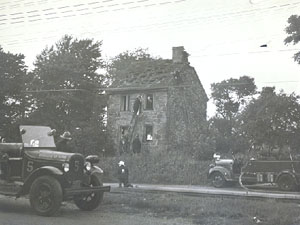 In 1941 looking to modernize, Manoa Fire Company was able to obtain a Dodge chassis from McGarrity and Moser car dealership. The chassis at this time were limited because of the War. Members of the fire crew built a fire engine body, installed a booster tank among other things and soon put this piece into service. This truck was special because it was handmade by the members of the Manoa Fire Company. In 1943 Manoa Fire Company's first rescue truck was put into service. The rescue truck was the original 1927 Dodge. This was one of the first rescue trucks in the area. This truck responded to several calls in the City of Philadelphia during the Second World War, including Philadelphia Station.

In 1945 Manoa Fire Company decided to add to its responsibilities. A Studebaker ambulance was purchased from Episcopal hospital. The ambulance covered Haverford Township, Marple Township, and Newtown Square. Manoa Fire Company was one of the first fire companies to get involved with E.M.S. (Emergency Medical Services). After the War was over, the men returned home and things started to get back to normal. During this time our own members created an in-house bell system. This was the first system created in the country. This was important because members did not have to rely only on the roof siren to wake them up for fire calls. In 1947 an increase in population led to the purchase of an American LaFrance 750 GPM pump. This replaced the 1927 Pirsch pump. In 1950 the 1927 Dodge rescue was replaced with a Lynn rescue box. In 1952-1953 a new firehouse was built due to the increasing size of apparatus. The firehouse was set back 200 feet from Eagle road in anticipation of the state widening the highway, which has never happened. In 1958 a Pirsch pumper was purchased. It was a hose wagon with 1000-gallon pump and no water. The pump panel was on the curbside not the street side. 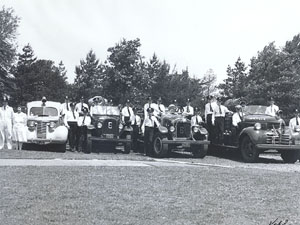 The ambulance service was still growing at this time. Cadillac vehicles were replaced in the 1970's with van style ambulances and eventually the box style ambulance. In 1964 the handmade 1941 Dodge was sold to Newtown Square, and twin 1964 American LaFrance 1000 GPM pumps were placed in service. The Lynn rescue was retired during this time and a GMC was used to replace it. The 1970's brought the replacement of the GMC rescue with a Dodge Imperial that had a four wheel drive system in place. The company Class A pump was replaced with Pierce Mini Pumper. In 1975 the firefighters of Manoa Fire Company were issued pagers. In 1990 Engine 51, a new Pierce Mini Pumper, was purchased replacing the original one.

In 1996 Engine 52 was purchased, a Pierce Class A 1250 GPM pumper. In 1999-2000 everything but the engine house was demolished and rebuilt. The new building was completed right before Christmas in the year 2000. The building is fully sprinklered, with smoke detectors, and male and female living quarters. There are also administrative offices, boardroom, full kitchen, and emergency management room. In 2001 the 1986 Pierce pumper was replaced with a 2000 E-One Rescue-Pumper. In 2006 we purchased an E-ONE Cyclone II Heavy Rescue.These trucks have begun the transition to maroon colored trucks, which was the fire company's original color.